If you go for a walk in Mankato, Minnesota you don't have to go far before you see a building that was designed by Albert Schippel. Even driving into town the Schippel-designed Bethany College may catch your eye from above the eastern end of the valley.

Albert Schippel was born in Wisconsin in the year of 1862 and was of Saxon-Prussian decent. By the time of the Dakota uprising of 1862 the Schippel family had moved to the Mankato area. In the 1880's he was working as a carpenter and had become associated with George Pass a local architect who also has several of his works still in existence. Shortly after losing three fingers of his left hand in a woodworking accident he joined with George Pass to form the Pass & Schippel architectural firm.

After starting his own firm in 1902 Schippel began a long, lucrative carrer of designing buildings in Mankato and the surrounding area. His buildings include schools, homes, townhouses, armories and even a hospital. These structures incorporated many of the then-popular styles of the era. Albert Schippel was not as well-known as Frank Lloyd Wright but during this time both of them were designing buildings that made use of similar styles and innovations.

Around 1920 Schippel started a firm with Ernest H. Schmidt who would later design the Mankato Armory as well as similar structures.

During a winter stay in Dallas, Texas Albert Schippel died on 22 January 1935 and was 72 years of age. He leaves behind a legacy of his work which can still be viewed and enjoyed.


Some Buildings Designed By Albert Schippel 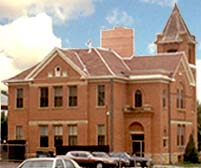 
This was one of the first buildings designed by Albert Schippel after the firm of Pass & Schippel was dissolved. The building is located on the southeast corner of North Broad and Washington Streets.

Immanuel Lutheran Grade School was used as a school for kindergarten to eigth grade from when it was built in 1903 until [1969] when classes moved to a newer structure connected to the church on the southeast corner of North Second and Spring streets 2 blocks away.

Note the curved arches similar in style to the detail of the Oleander Saloon.

Back To Top • Return To Main